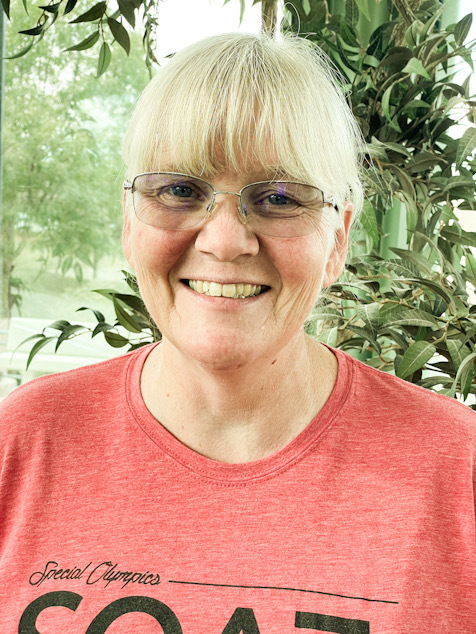 This morning, we are in Patrick House chatting with caregiver Sandy Koonce while she whips up several batches of delicious banana muffins. When the muffins are cool, she will send them out to all of the houses.

RA: How many muffins will you do this morning?

SK: Well over a hundred.

RA: It sounds like a major undertaking, but it is something you do a few times a year. How did you start this tradition.

SK: When we get bananas delivered from the kitchen, we’re not always able to eat all of them before they are really ripe, you know. So, I ask that anyone who can, if they could freeze their overripe bananas. Then I gather them up and make banana muffins. That way nothing goes to waste.

RA: You’ve been here awhile. Through some fairly lean times, and you’ve developed habits of good stewardship. The muffins being one of them. How long, exactly, have you been here?

SK: I was here for five years. Then gone for eight months – although I volunteered during those months. And then I came back and have worked for twenty-six years. So, thirty-one years total.

RA: You were in your early twenties when you first came to Rainbow Acres, right?

SK: I was twenty-three. I drove my little Ford Escort packed with everything I owned from Wisconsin to Arizona.

RA: What events lead you to make the decision to come here?

SK: I had applied through Intercristo, which is a Christian job placement agency. I told them I wanted to serve anywhere. They sent me 250 job possibilities. I have loved rainbows all of my life, and when I saw Rainbow Acres, I thought that was perfect. I talked to my pastor about it and my church sent me out here during Fort Verde Days to do a job interview. I went back home not sure if I would be returning. It was hard for me to leave, though. I actually cried all the way to the airport, and I don’t cry very much at all. Things worked out, and less than a month later, I was on my way to Arizona.

RA: When you arrived, were you overwhelmed? Excited?

RA: And what did life look like at Rainbow thirty years ago?

SK: Back then, when I first came, Starlight Cattle Company was just closing. We had Sunburst Farms and we had Rainbow Acres. There were forty some ranchers living here. We had… Duff, Huestis, Hopi, Paul-Dean, Apache, Navajo, Roubal, Chippewa, Sundial, Pima. So, I guess we had ten homes, plus Murphy which became Health and Wellness. There were four to five ranchers in most of the houses. I was considered a sub. At that time, caregivers worked ten days on and four days off. I would work four days in one house. Four days in another. Staff lived in their rooms and since I didn’t have an assigned house, I slept on a couch the first year I was here.

RA: After about a year, you were assigned to a house as the full-time caregiver.

SK: The caregivers at Paul-Dean moved on and I was asked to work there with five ladies.

RA: You met more than the ranchers when you came. You met Mitch. Can you tell us about that?

SK: When I worked Paul-Dean, this was in 1993, Mitch was my neighbor at Hopi House (which then became Patrick House). We shared a ‘Days Off’ trailer. I lived on one end; he lived on the other, and we worked opposite ten-day shifts. We were married in October of 1994. The October wedding was in Wisconsin. We had a November wedding in Arizona. There were staff and ranchers in our wedding party. We were able to buy jeans, white tennis shoes, and white socks for everyone. Then we bought everyone rainbow colored sweatshirts. Two people in every color. Staff in red, orange, and yellow. Ranchers in green, blue, and purple.

RA: In your years at Rainbow, what are the top three things you’ve learned?

SK: The Ranchers are just like everyone else; they just see the world differently. I once asked one of our lady Ranchers to bring me a gallon-sized Ziploc bag. She asked me if that meant the green, red, or blue. I didn’t understand until she showed me that the ends of the boxes, they came in had different colors. She didn’t know ‘gallon-sized’, but she could understand ‘blue’.

Coming from the Midwest where everyone is set in the way of how everything is to be done, working at Rainbow has helped me see life through different eyes, to open to the possibility that there are many ways to do many things. To be a successful caregiver, a person needs to be willing to change how they think and how they do things.

Believe it or not, being here has helped me be less competitive. Especially in my involvement with Special Olympics. I think the Lord led me into Special Olympics on purpose because it makes me chill out. In the beginning, I coached basketball, and the end score would be four to six. It would make me a nervous wreck. It felt like I was having a heart attack or something; because we were ‘‘losing’’. The players would run up and down the field and wave to their families. Someone would pass them the ball and they’d ignore it so they could keep waving.

One of my athletes had been taught to be kind to women, so every time he guarded a female, he’d give her the ball. He’d guard her from all the other players, so she’d have a clear shot. He’d give it back to her until she made a basket.

I had an athlete who was being guarded by an athlete from the other team, and they stopped in the middle of the court to hug each other. I was like, ‘No, no, no, there’s no hugging in basketball.’ I had to learn to think in a different way and to chill.

RA: You help to organize so many happenings here at Rainbow. What all are you involved in?

SK: Special Olympics. I help to organize the Christmas Shopping Trip. I coordinate the Christmas Gift Exchange and help with the All-Ranch Party. Any time we have a holiday party or fun event for the Ranchers, I love to be a part of that kind of thing.

RA: You coordinate the birthday treats for each month, which for our readers is a seasonally themed desert served at lunch once a month. You decorate a table and the people with birthdays that month get to set at the decorated table.

SK: Yes. We’re having pumpkin bars for this month. I also help to organize Rancher Trips. The Spoil Yourself Shopping Trip is my favorite. Another is the Durango Silverton Train. It’s a seven-hour train ride in the open air looking at beautiful scenery.

RA: Besides meeting Mitch and getting married, what has been the most surprising thing about your time at Rainbow?

SK: Rainbow Acres uses everything I love to do. Everything I’m gifted in, I use here. There are not many places I can say that. I have a degree in Administrative Assistant Secretarial, but I do not want to sit behind a desk all day long. Rainbow allows me to use my organizational skills but to also get up and move around. It allows me to connect with others. And I try to make everything we do fun.